Good afternoon readers and welcome to the 4th in the series of entomological online lectures on Italian insect life, following the huge interest in Ants!, Scorpions! and Midges, Mites and Mozzies! This time it’s the little buggers from the grasshopper family who are harmless enough except that, unwillingly I’m sure, they provide a constant supply of fast food for the local reptile population. And as regular readers will know, reptiles – especially the slithery legless variety – are my least favourite creatures.

So first off these things deserve some criticism for being dumb and tasty enough to become the snake equivalent of KFC. Then again, how reptiles catch them so easily I’ll never know because these things would be gold-medallists in the standing start long-jump at the insect Olympics. Most of the time they hop off at the slightest movement but just occasionally they seem to go into a trance and just sit there. Maybe they’re just doing a bit of pre-lunch sunbathing (snake lunch that is).

Mostly they’re just regular bug-sized grasshoppers that we have around here, between half an inch to an inch long. But he other day this bugger landed on the window: 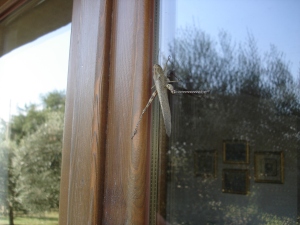 Taken from the inside he looked even bigger:

Now this chap had a torso at least 4 inches long and his legs were even longer. So is he a grasshopper or what? I got to doing a bit of research and it’s a largish family don’tcha know. In fact there are two branches; with grasshoppers, locusts, crickets, katydids (whatever they are) and even the praying mantis in the Orthoptera wing and cicada, the singers in the family, making up the Homoptera clan. All the Orthops look very similar to be me but the Sinatra-esque cicada are clearly different – they are all wings. As well as making a racket at night these things are real oddballs. Some of them lie around in a pupal state for 17 years then burst onto the scene briefly and nosiIy. Teenagers eh!

As for this bugger above I suspect he may actually be a locust which is the term for the swarming grasshopper. If he’s an olive scout I’ll be mightily pissed off if 10 million of his mates turn up next week and binge on our nearly ripe fruit. I should have checked his badges…