Well it’s been a lovely mild week here and it’s given us a chance to get a lot of the olives picked and processed before heading home next week. It was apparent that the fruit was ripenning quickly although up until yesterday absolutely nobody around here was picking the fruit. For the last couple of weeks we noticed that a few olives were beginning to fall from the trees. Remembering how we lost quite a bit of fruit last year through droppage (we were late harvesting because of Isobel’s illness and we couldn’t get over here earlier to pick the fruit), we decided to get on with it. I’d like to think that the sight of us up our ladders sparked a frenzy of activity because everybody’s started picking now. It’s humbling to be viewed as Il Duce of the Olive Groves. Ha!

I’m not sure the real Il Duce ever sported yellow shorts and flip flops whilst up a ladder picking his olives but here’s the Inglesi version. I’ve noticed that the style hasn’t caught on in a big way yet over here (see later). There’s also a shot of R more soberly attired – she’s a wizz at the lower stuff but often takes breaks, hence the chair to rest in, nestling nearby: 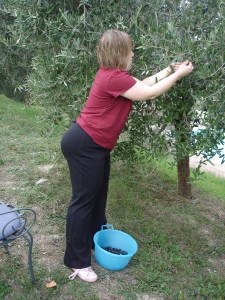 This is our third harvest and we’ve been delighted at the yield this year. Last year we collected around 52 kilos of fruit, which was more than the previous year, but  we’ve only picked around half the trees so far (and many of the fuller trees) but already we’ve gathered 78 kilos. I’ll finish the trees off when we get back from the UK but I’m sure the total crop will be more than double last year’s yield. The heavy pruning we gave the trees last year  has really proved beneficial, so I’ll be even more savage this time. I popped down to the oil factory this morning and found the lovely Flavianna who again processed our oil at no charge. We’re still a little way short of justifying our own pressing  but we’re getting there. If we ever acquire the grove next door to us (the nice old couple who are the owners were out picking today) then I’m sure we’d be producing enough to have a dedicated Pasta Paulie press and not to have to share a hopper with the little grannies’ olives. Not that I mind – I have a fine old time flirting with the old girls in their aprons. Speaking of which here’s what’s the local fashionistas are wearing this year (in fact every year):

It’s hard to imagine them in yellow shorts perhaps but I like their colour co-ordinated look. These are my neighbours and they’re very nice people. I also want a set of ladders like these one day.

I also showed C and R round the factory – they haven’t been inside before and it’s really fascinating – I love seeing the process in action and the smell of the pressed oil is intoxicating. We’ve got two large demi-johns of fresh virgin oil on top of our fridge now waiting to settle and clarify. C’s suggested that I find a new home for the glass monsters having caused the last one to fall and smash to smithereens on the stone floor of the kitchen (see posting of 26 August – Heading Home). That saw off the last of the summer oil so it’s great to have our stock replenished. I should also be able to bring quite a few bottles with us back to the UK for oil club members -some of whom have ben waiting a long time to see some of the green nectar.

One final thought – remember the recent posting about the grasshoppers etc?  We’d found a very large one on the dining room window and I rather jokingly suggested he might be an olive scout for a local branch of hungry locusts. Well look what I came across in one of the big trees:

He was just sat there with a defiant look on his face as if he was saying ‘Do you mind?’ when I tried to pick the olive he had his beady eyes on. I’d better not leave it too long before heading back for the rest of the crop or this bugger and his mates will have cleared me out.