Very old friends and readers and occasional viewers of my oh so self-deprecating LinkedIn profile will be aware of the three Bafta’s I was talented enough to be awarded back in the day. Oh I know it’s nothing to brag about really but it is three more than Sir ian McKellen’s got with his four nominations and zero awards.  I’m only joshing with you dear readers. I’ve only got just the two dust collectors messing up the place. But it’s still two more than Sir Ian and my acting hero (until we met The Fockers) Robert de Nero have between them, ha!. What, you don’t believe me?

What can I do to convince the incredulous amongst you? How about my first ever selfie with the two bronze winkers… 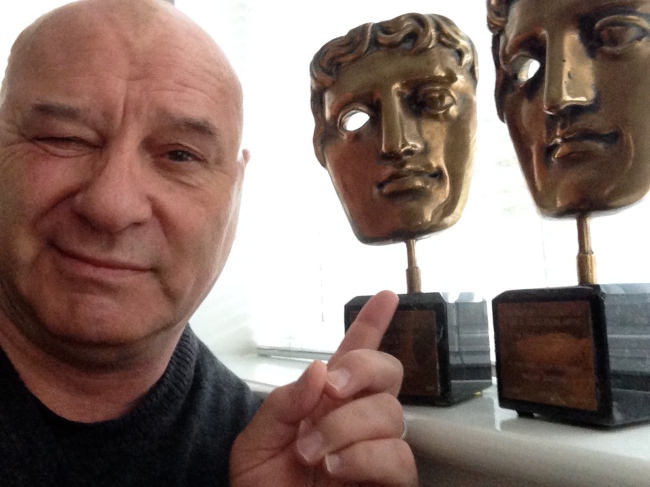 I have to admit that these were a joint Tate/BT team award for some outstanding work in the online arts world to which I contributed not a huge amount technically but I think we all know to whom Lord Puttnam and Clive Anderson were referring when they talked about ‘brilliant, imaginative innovation’ and a ‘magnificent driving force’ when presenting the awards. Ah I’m blushing when I think back. And as my fellow Bafta holders Sir Derek (Jacobi) and darling Dickie would agree with me I’m sure, it’s such a truly great honour to be a recipient of one tragicomic bronze mask; to receive two is just so humbling. There are so many people I would have had to thank because the awards were actually as much for them as they were for me. I was honoured to have been the recipient poster boy for two such wonderful organisations. The tears are welling up when I reflect on the duo of ‘faces’ on my desk (and not least when my grandsons use them as goal posts for indoor footie matches).

Anyway we Bafta luvvies are always proud to welcome new recipients and there’s no programme more deserving than C4’s Gogglebox for last week’s TV Bafta’s Reality and Constructed Factual Award – such a lyrical title. I love the programme and most of the characters and couldn’t understand why some of the stars of the show weren’t invited to the event. So mean. But I hope the likes of former teachers and old school socialists June and Leon, nicely stewed Steph and Dom, hairdressers Chris and Stephen, quite sexy mum Carolyne and the adorable Sandy and Sandra get replica Bafta masks too. They deserve them. I must admit however that I don’t much like creepy son George and the shouty Tappers and the too earnest lady vicar but they add balance to the show and its better for having them involved.

My absolute favourite though is Jay the silent one who seems a touch intimidated by his girlfriend’s mum’s German partner Ralph and his rather Teutonic views on life. Jay sports a hairstyle that was very on trend when I was at University in the early 70’s and just hasn’t been seen since (not least on me). But he’s an unwitting silent comedic giant and I love watching him squirm in total mute mode. There was an opportunity at the end of the current series where he was shown alone on the sofa and we were all aching for him to deliver his maiden speech but no words fell from his lips. Such fortitude. I’ll end this tribute to the show with a typical image of him.

I do hope the various stars of the show, thwarted by the lack of invitation to the awards event,  don’t all sell out and end up on reality shows because I’m sure Dame Judi would join me in thinking that a betrayal of our Bafta roots darling. Here’s Jay…