So before we went away, a lot of the beech trees along our driveway were just in bud  but we have returned to see them in ful leaf and they look lovely…

This box-shaped effect is done through a technique called pleaching which you see a lot in France. It helps to create a natural screening and my lovely daughter Ems has beech trees pleached like this in her garden to do just that. In the case of the trees along our drive it’s just arboreal decoration but doesn’t it look great? You can see the grass on the main field was quite long earlier in the week but yesterday the garden specialists came and mowed it all so it now look super and that smell of newly-cut grass is just so evocative…. 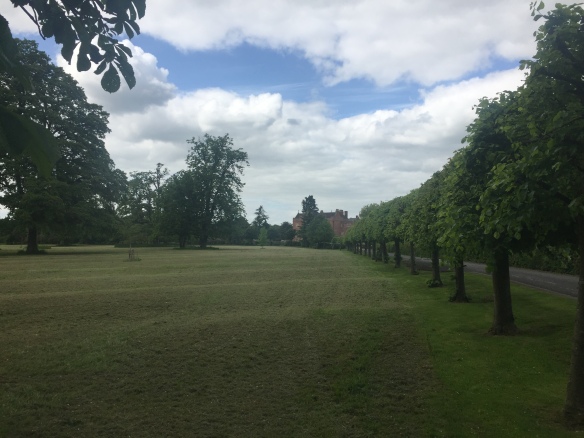 What it meant was that  I could spot loads of wildlife out on the main field early this morning when I went out for my newspaper – deer, rabbits, crows, squirrels, doves all in evidence. It’s such an attractive setting and we feel very grateful to live in such a lovely place.

So that’s covered off the sublime. And the ridiculous? Well I’ve been watching the unseemly legal squabbles between Tinseltown’s Johnny Depp and ex-wife Amber Heard and, this side of the pond, a  real-life footballers’ wives’ spat featuring a libel case brought by Rebekah Vardy against Colleen Rooney. You cannot move on social media without seeing huge amounts of footage and opinion on both cases. And from what I can see it looks like nothing more than 4 very unpleasant  people squabbling about who said what to whom, whilst telling untruths.

The Depp/Heard case in particular is spectacularly nasty. He lost a defamation case to her in London last year and was ordered to pay her $7m in damages. She immediately stated that she didn’t want a penny of it and had donated all of that money, split equally, between 2 charities. It now turns out she hasn’t given a single dollar to either charity. It also looks like she’s been economical with the truth about so called bruising caused by Depp’s alleged abuse. She also struggles to cry real tears on the witness stand. Some actress.

Meantime Depp has lost his acting job as Captain Jack Sparrow with the Disney franchise Pirates of the Caribbean and has sued Heard for $50m in damages (even though she has just the $7m in the bank Frank).  Heard for her part has counter-sued for $100m claiming to be the victim of his abuse. And all along it seems that she’s been the main abuser. Not that Depp comes out with much credit – he can be  generous yes but at other times boorish, a drunkard, yes he probably does hit out in fits of frustration, and oh he’s a massive cocaine fiend. To be honest Johnny I can’t see how that fits with Disney’s wholesome image mate. It really is an unseemly tussle and neither of them deserve to be rewarded IMHO. I do like Depp’s lawyer, Camille Vasquez, though. Heard’s are a pair of buffoons – the male lawyer even raised an objection to one of his own questions. F*ckwit.

Meanwhile the Wagatha Christiegate affair seems to be about who gossiped on social media about whom. Clearly these are women with more money than sense (or at least their husbands are) and the thinnest of skins. Have they got nothing better to do? Are they so bored of the shops in Alderley Edge? The footballing husbands even got dragged in this week and neither of them are blessed with dignified perceptiveness and quiet intelligence. It was reported that at a major championships the England manager Sven Goran Ericsson (or was it Roy Hodgson?) had to ask his captain, Wayne Rooney, to have a word with striker team mate, Jamie Vardy, about Jamie’s wife’s constant social media tittle-tattling which was unsettling other team members and their wives/families. Jamie denied it happened, implying that Wayne hadn’t the b*llocks to do it. Or something like that. I mean who really cares?

It’s a very First World kind of issue that makes you just sigh with disbelief especially when you consider what’s happening in Ukraine right now. I don’t want to get all sanctimonious but for goodness sake just drop the actions, shake hands and count your blessings that your worst problems are concerns over your media images. Pathetic.