Well I’ve got a scarcely believable  update on the family’s health situation but I’ll leave that to the next posting as hopefully things will have calmed in a day or so (including my mood). So this then is a completely different posting about two little airfields, still very much operational. Not my usual topic and not very interesting you say? Perhaps….

So today I dropped Caz off at a medical centre in the nearby town of Wellesbourne for a chest scan. it was a 40 minute + procedure so I took Becks off to our local airfield. Now I’m not sure of its history but it must have been something important during WWII as it has a long tarmacced airstrip. A former bomber squadron would have been based there I guess.

These days it’s just a venue for lots of light aircraft we see flying over Goldicote Hall all the time. And this monster… 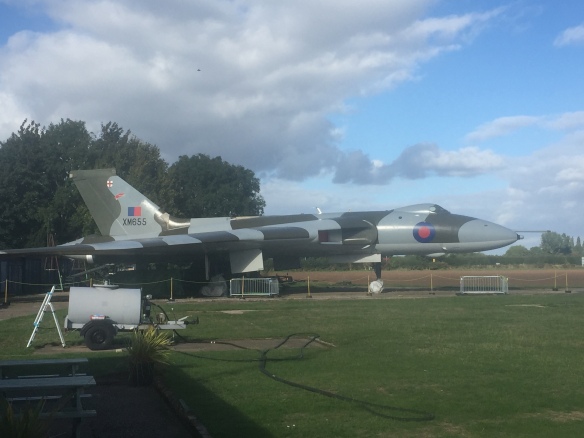 Yes just down the road from us is a working XM655 Vulcan bomber which is looked after by the Maintenance and Preservation Society at the airfield. The Vulcan only occasionally makes high-speed taxi runs along that impressive runway, and prior to last year had not done one for five years. And then they did one a week or so ago. Let’s just assume the pilots or the brakes were a bit rusty. Because rather than gently easing up before the end of the strip, the bomber just about managed to stop before ploughing through the perimeter hedge and onto the adjoining road… 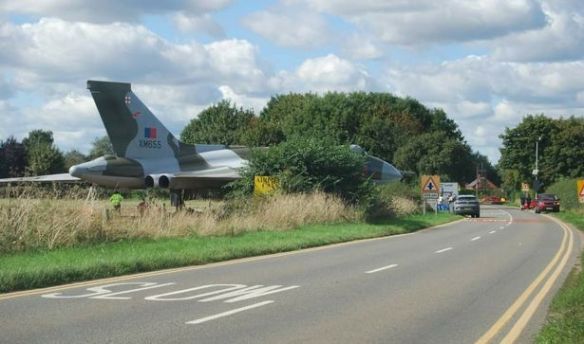 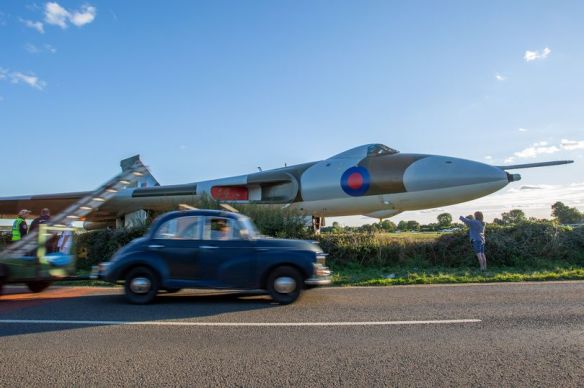 Ha! Can you imagine what the driver of that Beetle(?) must have thought seeing a fuc*ing Vulcan bomber cutting him up? I’m not an air-fuel petrol head but that’s just magic!

There’s bound to be an official report on the circumstances but I don’t care. I just love the idea that we have a vintage Falkland’s era bomber just down the road going rogue. Maybe the old girl just felt like one last flight out of S Warwicks but couldn’t make it. Ha I sense how she feels but I hope she enjoys a few more glorious surges down that runway of life.

If that wasn’t interesting enough, yesterday I headed over to deepest Essex to Andrews Airfield. It’s near the village of Stebbing Green which is near to…well, nowhere.  Let me explain this sudden aeronautical engagement. Our very good friends M&S were visiting from the USA. They’d had a few days staying with old friends etc but the primary purpose of their UK visit was very special and personal.

You see M’s grandfather had been a pilot in the Polish Fleet Air Arm during WWII based at Andrews. Back then it hosted USAAF bombers and his Polish crew provided the vital striker support.  Anyway my mate S had kind of dug into this bit of personal history and considered that it might be nice to honour the memory of M’s grandfather’s contribution to the war effort.

Now at what point he involved his lovely wife I don’t know but contact was made with the Polish Air Force Memorial Flight people in the UK. They found the local Essex airfield with the Polish connections and set up a dialogue with S&M. From that point on the guys decided that they’d like to have an illuminated stained glass memorial plaque commemorating the Polish squadron’s  badge. So a local stained glass artist Angi was commissioned and everything was sorted for the revealing yesterday.

With all their illnesses, Caz and Becks couldn’t make it but I did, albeit I got lost locally and kept the guests waiting 5-10 mins for the reveal. I have to say it was a lovely function and it was clear how much having some actual Polish memorabilia donated to the centre meant. There was plenty of USAAF stuff but nothing about the Polish squadron.

There were dignatories from the local MP, the Dep Mayor of London (I think), the Polish Memorial Flight etc. But I couldn’t believe how many people were outside and the reason was that the local team had arranged for a bloody authentic Spitfire from WWII to fly in. It was sensational of course. The crowd had found out on FB. But it was wonderful to see such a machine close up and personal and to see that our friends S&M were guests of honour. 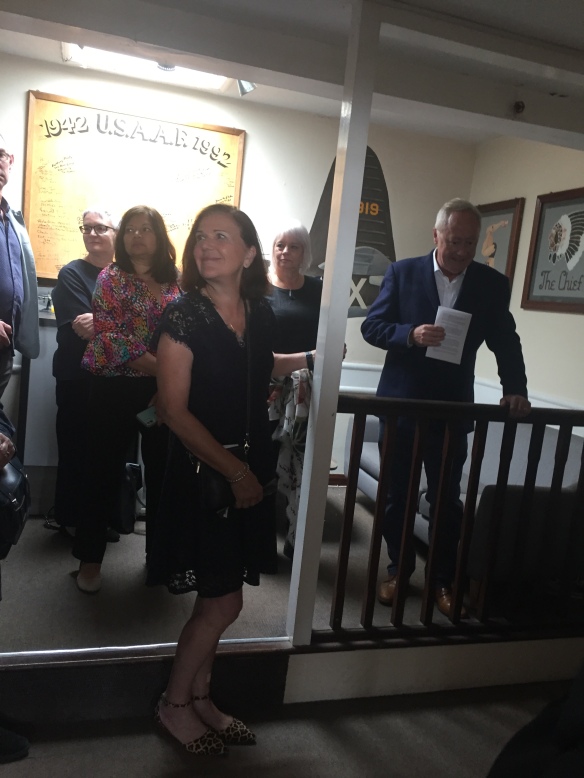 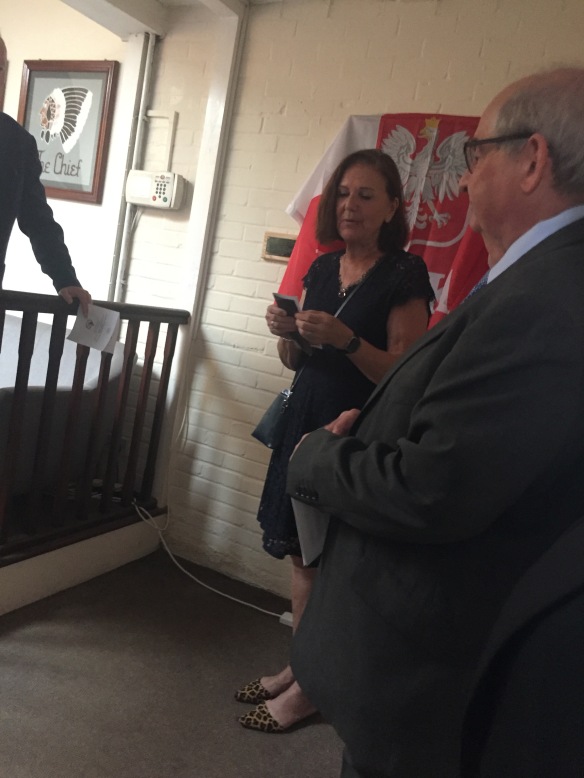 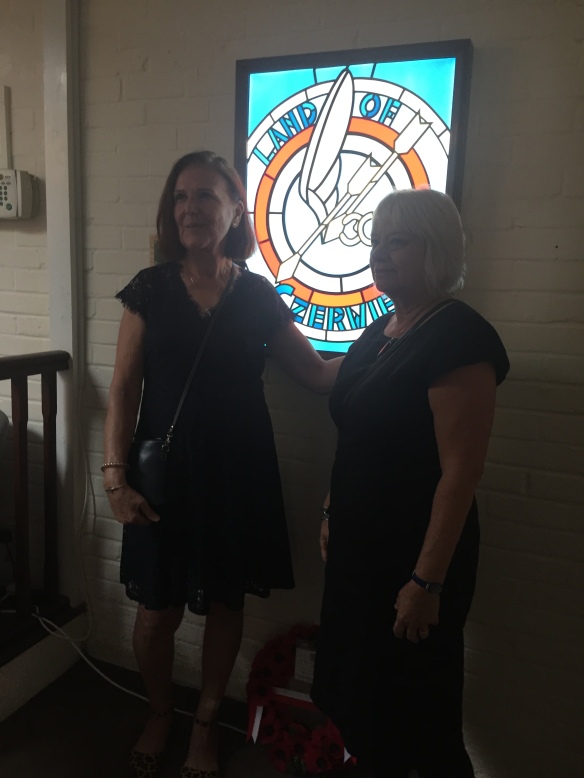 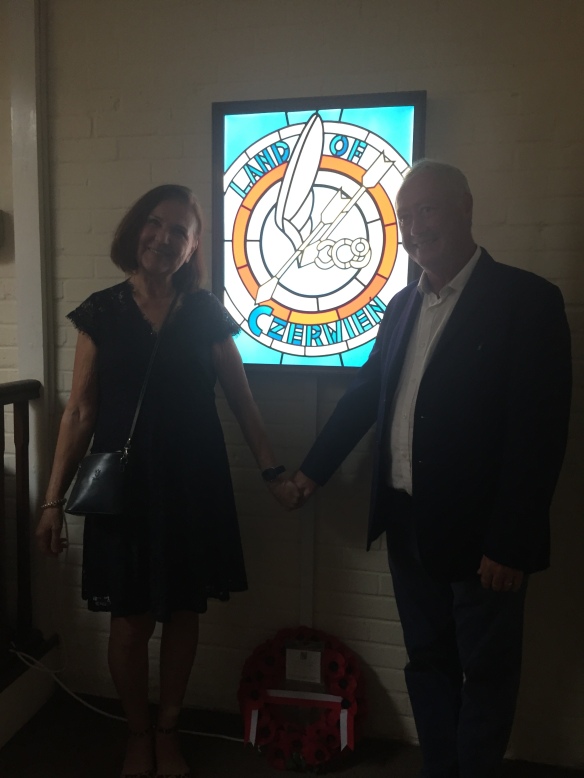 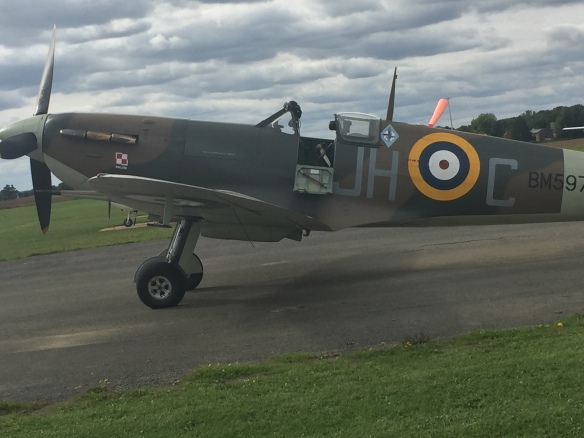 I couldn’t have been prouder of my friends to be honest in ensuring a memorial to M’s grandfather’s squadron’s brilliant contribution to the war effort. Very poignant reminder about what all our grandfathers gave to save us.

4 thoughts on “A tale of two airfields”