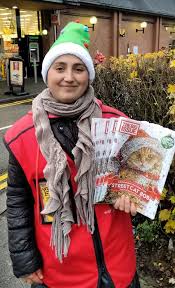 So here in Stratford uA there’s a resident collection of street beggars, buskers and the like.  Every town has them I guess. They seem harmless enough though I do sigh each time I pass by some young lad who seems to be fit and relatively healthy. I always imagine they could find a job if they put their mind to it. But I admit I don’t know their back story. There’s an older guy who sleeps on his cardboard stack outside Boots. He’s quite a character, By 1-2pm he’s usually loaded and serenading the shoppers and tourists with his drunken ballads. He always attracts a curious crowd. Bless him.

The other day I spotted something on my phone it was a clip from TikTok which was on my Facebook video feed. It was about a young lad who befriended a street beggar who was older than him. He might have been called Tom. Now the young lad started by giving him a coffee and maybe some fast food food and of course some cash. But each time he would film the conversation he had with Tom, who was always massively appreciative, then post it on TikTok. After a while it built up a following and people started making donations which the young lad collected and gave to Tom. Sometimes it was fairly large amounts £80- £100 and Tom was just bowled over. His face was a delight. And I had such a lot of admiration for the young lad who had taken the trouble to make friends with Tom and to organise a digital collection programme for him.

Now I have a confession to make. I haven’t given any of the street guys any money since we arrived here. I’m always reluctant to give the young fellas something because I think they could be working. And it’s not like they are busking or performing in someway. I never give the old guy anything because I’m so certain he’ll just go and blow his money on cheap booze which must be slowly killing him. I know you’re probably thinking I’m a mean-spirited git. But the reality is since lock-down I’ve just stopped using cash and I hardly ever have any change in my pocket these days. I can’t be alone in this and I was wondering what impact covid has had on these guys’ earnings. They still beg but it must be more challenging now for them.

Then the other day I noticed a new face on the main shopping street, a young female Big Issue seller a bit like the young lady pictured above.  Now I have some history with BI sellers  – I’ve always felt comfortable giving them some cash because you believe them to be homeless and doing something in an organised way to change their circumstances. On the whole I’ve usually found them to be cheerful and polite too. Until I came across one BI seller who worked outside M&S in Teddington. She was miserable and seemingly ungrateful. Then one day I noticed her catching the same train as me and I noticed her on there often.  Plus I also noticed she had the latest Apple smartphone – far better than the thing I was using at the time. These things were really expensive back in the day (still are let’s face it). Anyway I just began to wonder how she could afford a top of the range smart phone and to commute by rail every day. I didn’t begrudge her doing that but I didn’t like the idea of funding her lifestyle, so I stopped giving to her.

I’ve a feeling that I’ve written about this before but I’d just forgotten about it until the other day when I walked past the BI seller in Stratford and she smiled and asked me if I wanted to buy a copy and I just shrugged and said v sorry but I don’t have any cash on me. No worries she said, I have a card reader and she whipped out her device. I think I was temporarily stunned and just stood there open-mouthed for a second. I’ll admit to feeling slightly conflicted about this. I partly-admired her (or is it BI’s?) initiative and technological up-to-datedness. But I also had those doubts again – this is like super-begging. And I’m already plagued every day by scammers on my mobile and I really didn’t need any more of my financial data loaded onto another platform, so I declined the purchase. Mean again? Probably.

I’m not especially proud of myself over this. But it’s who I am. I’ll never be as generously spirited as that young man above. I have an issue over it, big one, simple as.