Well after the last posting which was a bit of an old school cliff-edge rant I thought I return to gentler pastures and talk about a recurring theme in my postings; stuff I notice and just feel compelled to write about. It’s always pretty mundane stuff but it strikes a chord with me. And I have 4 topics this evening for you ooh.

First up the bloody weather.  I know it can be variable in this country but it is just 8 days ago since we were sat outside watching Shakespeare performed al fresco as it were and getting my head and neck sunkissed in the process. Lovely. We had the autumn equinox a few days ago to make the formal end of summer and blam. I pop to the shop to get my paper at 6am and it is still night-time. Black as strong coffee.  And it’s bloody cold that early now as well. Well compared to what to what it was 2 or 3 weeks ago.  Plus it’s been peeing it down for the last few days so my walk to the shops is a wet affair. I bloody hate cold wet weather.

Second up I see from their latest tv ads that the mobile network 3 is promoting itself as the big network – a line that we used at Cellnet some 30 years ago. Plus ca change eh. It always was a killer line. Bloody plagiarists.

Now I’d never deny anyone a shot at fame and glory because of their talent. But my third notice concerns a high profile sleb who drives me fucking mad. It’s Rylan Clark-Neal. I just don’t know what people see in this talentless jock – his stock phrase is ‘shut the front door’ aired as campily as Beverley Leslie on Will & Grace. He won some singing contest a few years ago, X Factor or something. Actually he didn’t. I think he came 2nd or 3rd and cried tears almost 57% real like a baby in a wet nappy for 3 whole minutes. That was it, the grandmas loved him and ever since he’s been a darling of the BBC with shows on every frigging channel. And he’s never sung one song since. Not that he could back then. But here’s the thing. Some 4 months ago he and his husband ran into marriage problems, for which I’m sorry of course. Nobody should be unhappy. But he’s been absent from my screen and the radio channels whilst they resolve their very deep issues. And it made me happy. If I could shout hurrah without sounding cynical I would. I don’t want him to be sad and low but I was personally glad of the absence.  His personna is just so annoyingly camp which fits that whole Strictly scene. And now he’s re-surfaced on BBC’s It Takes Two (the Strictly aftershow prog), teeth whiter than virgin snow, hair blacker than tar and his beard and moustache trimmed to Rolf Harris perfection. And that annoying Essex gay twang thang. I don’t know, I must be getting old. I like talent but can’t see it in him. I just hear ‘shut the front door!’ and I see a contemporary version of a catchphrase Larry Grayson.

OK enough, he clearly identifies with a demographic the BBC needs desperately. It just doesn’t include me. So moving on to item 4 it’s about branding. The other day I was following a van on the motorway and the company identity was strong but vague at the same time. Now most of the time you follow a van on the motorway and it looks like this: a van with every frigging bit of knowledge about the company … its logo, a snappy strap line about what they do, tel no, email address, year it was established, its home town address, the owner’s favourite football team, the names of his kids, his favourite Indian meal etc. In other words way too much info… 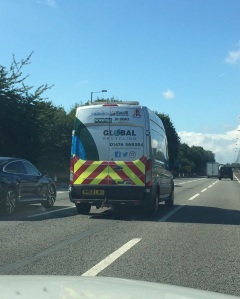 But this is what I saw on a van the other day, just a brand name with nothing else. Absolutely nothing to identify what the company does….

There was nothing other than the brand name, Proovia. Whoia?  They could be condom producers, mattress manufacturers, celery growers. There’s just no clue and they aren’t exactly a household name. I had no idea what they did but was intrigued to find out, turns out they are movers. Proovia, the office removers. Of course it’s so obvious. Why wouldn’t they add just a bit of info on the van somewhere about what they do and how to contact them? Is marketing that difficult to grasp?